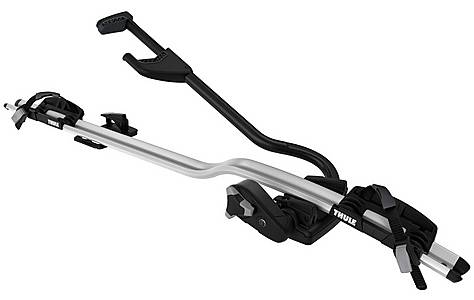 Thule’s ProRide 598 is one of the easiest and quickest roof racks to fit a bike into, and while this second generation version might look almost exactly like the original 591 it replaces, it boasts a couple of worthwhile improvements. Here, our Roland Young, gives it a test run.

The ProRide system lets your bike sit on its own two wheels on a metal base running the length of the rack.

A big cantilever arm keeps it upright, clamped around the down tube by softer, more rubbery jaws that ratchet tight enough to keep the bike stable. You cinch it closed with a big dial that tightens easily and locks securely.

The jaws also have the added benefit of rolling your bike into roughly the right place for the wheel straps, which loop over your rims to add further support. You can also now tension these diagonal ratchet straps up in much the same way as an XC race shoe buckle.

Here at The Roofrack Company we like the ProRide 598

That’s because there’s no need to remove the front wheel, which saves a whole load of time and faff and reduces the chances of scratching the car with an exposed fork leg. My first few drives were spent craning my head out of the window to see if the bike was still there, but I’ve been using this model for months now (and the old version for five years) and my bike has never come adrift.

The new model has more depth to its jaws and softer rubber, so it’s even more secure. I’ve tried to shake the bike loose with a spirited drive, but the Thule held firm even on the most serpentine of country roads.

Thule says the jaws have to bite low down, near the bottom bracket, and not where I’ve been using it in the inset picture. The point is, the 598 doesn’t fit all bikes. It also puts your bike high into the wind, making a serious dent in your fuel economy — our experience suggests as much as 10mpg. So it’s a great rack, but not for every bike… or every nervous driver/rider.

The Thule ProRide 598 is available in black and  also comes in silver.