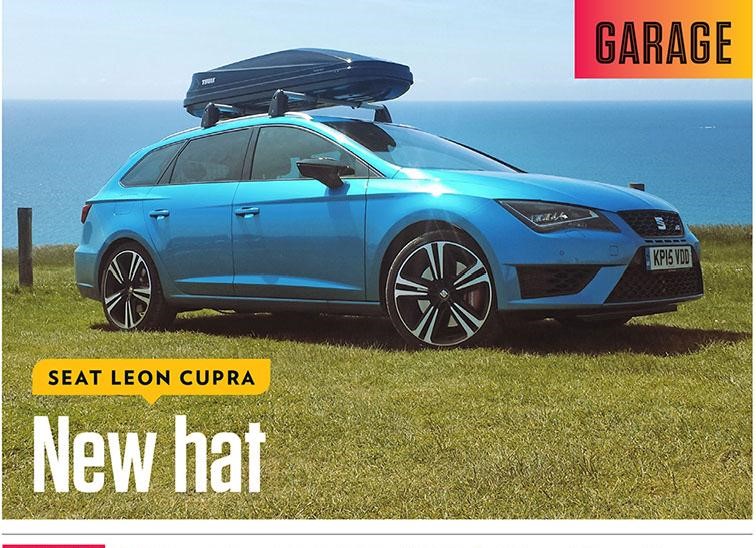 Another month, another accessory. And further proof that the Leon suits all manner of racks and boxes, whether it’s a bike rack or a fetching roofbox, or even the Thule Touring Sport roofbox. Here, The Roofrack Company’ Roland Young gives the Touring Sport a run during a weekend trip to Dorset.

Though it’s really supposed to hold a few skis and salopettes, the Thule Touring Sport roofbox also neatly compensates for the in-car luggage room sacrificed by taking animals and humans on a weekend trip to Dorset. Specifically, the box adds 300 litres of space for a load of up to 50kg – more than enough to hold a few carryalls and walking boots to make the cabin a little less squished.

But aside from this, I reckon it actually makes the Leon look even more purposeful and it even shares the car’s streamlined silhouette.

I’m probably getting overly chirpy about the design. But, hey, it’s about as sexy as a roofbox is ever going to get and (as you’ve probably gathered by now) I like things that make virtues out of dull necessities. Our lovely bright blue Seat does that in many ways, which is why I’m liking it more and more. On a practical note. the box is ridiculously easy to attach (a couple of crablike claws simply grip the roofbars), plus it locks safely so you can leave your luggage up on the roof unattended.

Driving with the Thule Touring Sport:

Many people and much luggage meant a sleek roofbox was a welcome addition to the Seat Leon for a recent trip to deepest Dorset and, due to its low-drag shape, wind noise is kept to a bare minimum.

Fuel economy dropped slightly, but only by one or two mpg which is admirable considering I also had extra people on board. Despite being loaded up like a donkey, the Leon barely noticed. If anything it felt a little more settled under the extra weight, while the 2.0-litre turbo was just as punchy.

Because, remember, underneath all the sensibleness lurks a 276bhp hot hatch ready to escape given half a chance. On roads like the B3157 between Weymouth and Bridport, those chances arise often. At times I forgot I had company and cargo, until being lightly admonished by the spouse in the passenger seat. If it weren’t for that, we’d have driven along as normal and my ear-ache might never have happened!

Shop for the Thule Touring Sport